Makindye Man Stubbed to Death in Rental House
ChimpReports / July 12, 2022 at 03:56PM
Police at Katwe have arrested two people in connection to the brutal murder of a local resident.

Noah Mathew Kinono, 27, a resident of Kigaga zone Salama Makindye division in Kampala was stabbed to death over the weekend by unknown people.

Kampala Metropolitan Police spokesperson Luke Owoyesigire says the deceased was stabbed with a sharp knife around the neck.

“Two suspects have so far been arrested by Police to aid in the investigation. They are currently detained at Katwe Police station.”

“We have recovered the murder weapon (knife) and it has been taken for analysis. We have also cordoned off the scene of the crime for further investigations.” 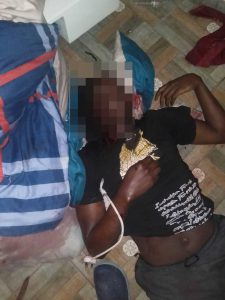